Baby Hummingbirds: All You Need To Know

Hummingbirds are relatively very small in size and belong to the order Apodiformes. From their small size, it might be interesting to find the size of their babies also know as Baby Hummingbird. They camouflage well with their small nests so their babies may not be easily observed. 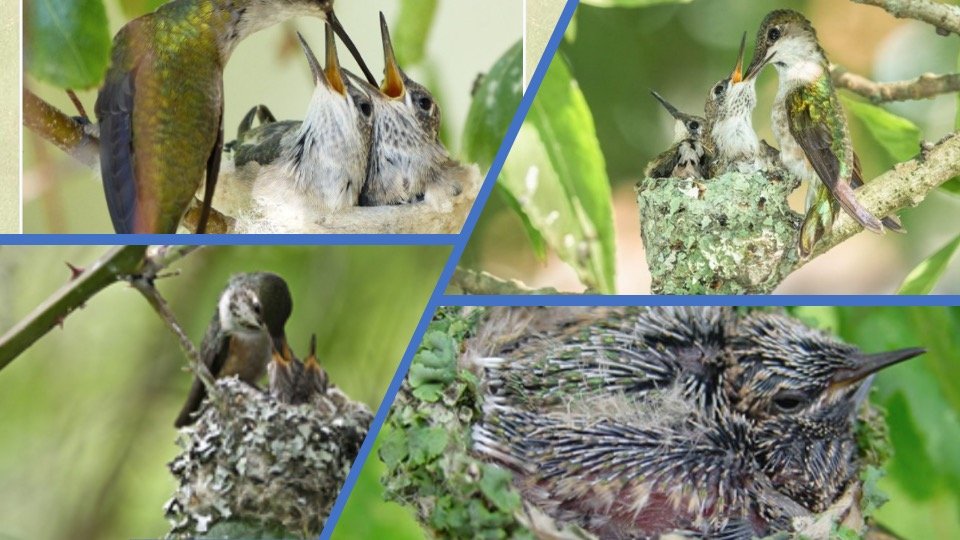 These tiny hatchlings also known as Baby Hummingbird are born naked and weigh about 60 grams. Baby Hummingbird’s skin shade may range from dark slate, pink or dark gray. Yellowish white pinfeathers cover their bodies in 2 thin rows along their dorsal tract along the lateral sides.

Baby Hummingbird’s bill is yellow and is short, the lower mandible and throat can vary in color and can range from orange to a red shade. They hatch with closed eyes and possess no egg tooth.

Baby Hummingbird start to open their eyes after 1 week. These hatchlings are dependent on their parents, as they are altrical which means they were hatched in not a fully developed state and require parental care for survival. They can respond to the mewing call of females and have no coordination.

Around 7-8 days, small pinfeathers can be seen and at 2 weeks old the first exercising wing can be seen. Within the next 2 to 3 days they can defecate usually over the rim of their nests.

Why do you never see baby hummingbirds?

Baby Hummingbird’s nests are built to avoid predation and are generally well camouflaged and small. These are located in secretive locations where they are not easily observed.

When Baby Hummingbird become independent and ready to leave their nests they grow in size and have similar plumage to the adult birds making it difficult to distinguish between the two. These young birds may often be mistaken for adult female birds.

How big are baby hummingbirds?

The Baby Hummingbird of different species may vary in size but their average size is approximately 1 inch in length and these tiny babies weigh 0.62 grams. To give a rough estimate they would be similar in size to a jellybean and in terms of weight would be about a third of the weight of a U.S dime.

Baby Hummingbird start to gain weight from the first day itself and continue to increase till 18 days. They are able to gain 0.5 grams of weight each day that indicates an increase of about 50% in their mass.

What do baby hummingbirds eat?

The parental care essential for survival is only provided by the female parent that feeds the young ones. The nestlings are fed on a mixture of nectar and partially digested bugs that are regurgitated by the female into the bill of these young ones.

Baby Hummingbird are fed in this manner for the first 15 days of their lives and during feeding, the throat of the female often swells which facilitates regurgitating.

When the mother retracts back into the nest she calls the nestlings that respond to the mewing calls and wind from her wings. In about 2 weeks the young ones start to independently feed on the insects brought by their mother in the nest.

Where do hummingbirds nest?

Their nest site is generally located in secretive places in bushes and trees near a down-sloping branch. They like spots that have plenty of open areas below the nest and a leaf canopy overhead.

They nest in regions where there is an availability of insects and nectar-like gardens and forests. Once the site is selected then the female Hummingbirds take 6-10 days to construct the nest.

The dandelion down or the flat base of thistle is first made that is usually attached to branch aid of spider web. Then the side walls are constructed using spider webbings, white plant down, and bud scales.

What to do if you find a baby hummingbird on the ground?

In rare occurrences, if a hatchling is found on the ground then it should be immediately be placed back into its nest.

Care should be taken picking and carrying the hatchlings, observe if their feet are clinging to any object if so pick it also along with the hatchling to avoid breaking any tiny bones.

If it is difficult to spot the nest or if it has been damaged then the hatchling should be kept in a warm, quiet, and dark spot. You can also contact the bird specialist or local wildlife authority for the rehabilitation of the bird.

What is a baby hummingbird called?

There are no such specific names used to refer exclusively to hummingbird babies but terms like hatchlings, chicks, and nestlings are often employed by birdwatchers and ornithologists.

Their tiny eggs are white, elliptically-ovate, smooth, and are similar in size to a coffee bean. The ruby-throated hummingbird lays eggs that are 8.6mm in width, 13mm in length, and weigh just 0.56 grams in weight.

How many eggs do hummingbirds lay?

Their average clutch size is 2 eggs but they can also lay 1 egg occasionally. There have been instances where even up to 3 eggs have been reported. The clutch number in a year depends on factors such as the weather, habitat, and species. They generally have 1 to 3 broods per year.

How long do hummingbirds take to hatch?

The incubated eggs hatch around 12 to 14 days. This may be influenced or vary according to the range, location, and species. In unfavorable conditions as in winter, the incubation period may be longer. The females incubate the eggs and keep them around 96 degrees. They only leave their eggs in search of food for few minutes. After the hatchlings hatch, the eggshells are discarded by the females and are found on the ground below the nest.

What month do hummingbirds have babies?

Egg-laying may vary depending on their habitat and species, but the general pattern suggests that they are laid from the last week of March till September. May constitutes the month when most of them will lay their eggs. The second egg is generally after 1-3 days after laying the first one.

When can hummingbird chicks fly?

Their lifecycle is fast as they can fly by about 3 weeks of hatching as they develop feathers that aid in flying. Their tail feathers may still be short but that does not affect them. Around 2 weeks they start exercising their wings to fly and by 3 weeks they are ready to fly.

How long are baby hummingbirds in the nest?

This time period can differ in different species but usually, the hatchlings stay in the nest for 18-22 days after that they develop into fledglings. When they fledge the nest initially, they are heavier than the average adult. This declines as they develop their foraging skills.

How long do hummingbirds stay with their mother?

After fledging the nest, they continue to stay with their mother for another week during this time the mother will feed them. After which around 3-4 weeks they head off their own as they have developed flying skills.

They usually do not reuse nests but do utilize the materials of the older nests. Certain females may refurbish their existing nests for raising a second brood.

Baby Pigeons: All You Need To Know